Adventures of a teenage author...

This is Marta, author of the Darkwoods series and of Marta's Blog. I created this blog specifically for blogging about my 2015 study abroad adventures in Europe, but it's becoming the blog for all my travels. I hope you enjoy all the pictures and stories!

Historically speaking, the Far East has been a religiously complex place. The area was extremely international, hosting a profitable trade economy that imported goods from many different countries. The people who imported these goods also brought their home religion with them, and, for the most part, were well-received. This was especially true in China; traditional Chinese religions or philosophies never claimed to be exclusive, so the Chinese were historically open to incorporating foreign religions into their own religion.

In the 1600's, the Jesuit order (an order of monks famous for their mission and educational work--they founded a load of colleges) were very present in the Far East, and Macau was the center of their operations. (They weren't the first Europeans there, however, contrary to that article--Marco Polo was there long before the Jesuits were founded).

Central to Macau was the beautiful Church of St. Paul. 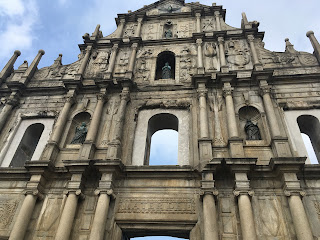 St. Paul (seriously, Blogger, fix your formatting issues with the new template!) was built in the 16th century, but caught fire 3 different times and was not rebuilt after the last time. I remember chatting with a professor who said that it was built by Japanese Christians escaping persecution from persecution in Japan, but all I could find related to that was this article, which just says the cathedral holds their relics.
This is definitely one of the most famous single spots in Macau, and we visited here first.
First, the ruins are located on the Rua de Ressurreicao, or the Street of the Resurrection. In order to get there, we first had to walk down the Rua de Ressurreicao.
Simple, right?
Not really. 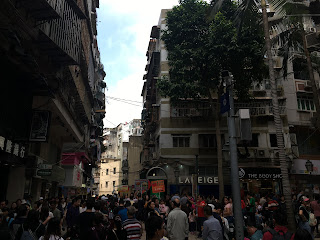 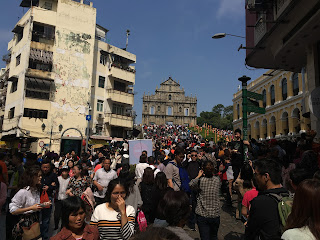 (Seriously, why does it hyperlink whenever I hit "enter" after a photo?! Blogger!!)Macau is the single most crowded place on the planet. Of the regions in the world (not cities, but regions), it has the highest population density of the entire world, with more than 21,000 people per square kilometer. As if that wasn't bad enough, because we were there during Chinese New Year, people were here on vacation. (See, in Shenyang, they tell us that people go home for Chinese New Year. Clearly, people also meet up with their families to go on vacation.) In 2019, over the two weeks of Chinese New Year, more than 1 million people visited! To top it off, we didn't notice any subways, so everyone is packed together on the streets above ground.
It took us something like 45 minutes to walk the Rua de Ressurreicao. 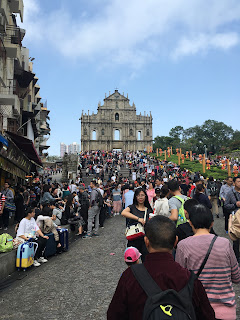 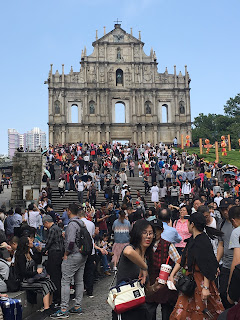 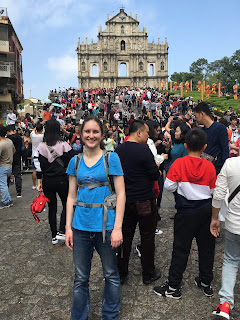 (Holy smokes, Blogger, you're just turning all the pictures into hyperlinks?! Knock it off!)
Once we got there, though, we had a great time enjoying the beautiful ruins.

ARE YOU KIDDING, BLOGGER! When I tried to center all my photos, it just completely rearranged everything I'd written!
(And now it won't let me log into my YouTube account so I can insert the video I took of this post when it was all jumbled up.)
Anyway, that was St. Paul's Cathedral in Macau. If you want to visit China, but you don't want to go through the process of getting the tourist's 10-year visa, you can definitely visit Macau and see St. Paul's (because Macau doesn't require visas). It was well worth the visit.
The next place we went to was... not a church.
Posted by Marta Stahlfeld at Sunday, August 09, 2020 No comments:

First off, the bus tour!
Okay, it wasn't really a bus tour. We got on one of those hop on, hop off buses that covered most of the city. But I did have some fun snapping pictures from the upper deck!
Warning in advance, though: I'm writing this more than a year after I visited, and since we didn't set foot in any of these buildings, I only vaguely remember what they were. I tried to do some extra internet searching to refresh my memory, but as it turns out, some of these are hard to find. If I could find the place, I linked to it in the caption; if not... well, you can go there yourself and correct me if I'm wrong! 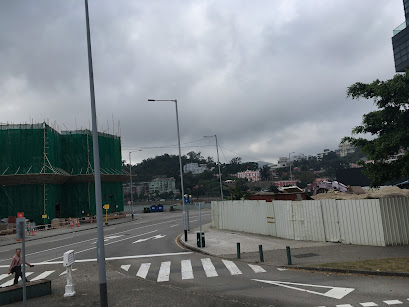 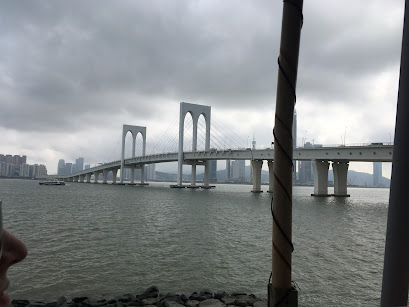 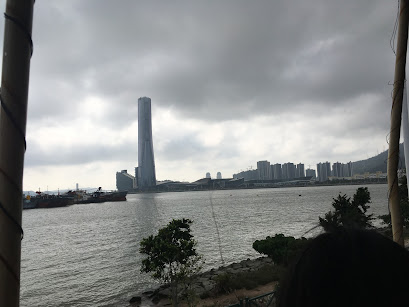 As I was adding these pictures, I realized something else: Google photos dated all my pictures by US time, and the dates in the US changed while we were in Macau. So the photos at the end were actually the first photos, time-wise. But I'm not going to rearrange them now--Blogspot just updated to a new layout that is getting right under my skin.
See you in the next post!
Posted by Marta Stahlfeld at Sunday, August 09, 2020 No comments:

First off, here are the answers!


Thanks to its founding, Macau is a very historical city. Thanks to it being an SAR, it is basically Las Vegas in China. It is the only place in China where gambling is legal. They have their own currency and their own flag.

A historical site that we did not make it to (because it was crowded!!!!!) was the Moorish Barracks (because Macau was a very international city), but we did have a tour of the city and make it to two different places. Check those out in the upcoming posts!

Macau is still a very international city, and as a reference to its history, signs are still written in both Portuguese and Chinese. The blog Stained Glass Travel has a nice piece about the history of parts of Macau, but one of their pictures caught my eye: 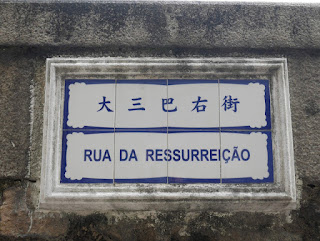 These two names are not exactly the same. To be crystal, sparklingly clear, I know almost nothing about Chinese characters (I haven't even learned the characters for my own name), but I recognized that second character as the number 3, which does not show up in the Portuguese name. I pestered my Chinese friend for help explaining it; she explained that the last character is the word jie, which means "street", the second-to-last one means "right", and the first three are the name Da San Ba. Apparently, the Chinese name comes from the Chinese name for memorial gates and the church at the end of that road.

There's no real point to this paragraph, except to comment that translations are complex things.

For most Chinese cities, Americans need a visitor's visa; however, there are places called Special Administrative Regions (SAR's) that have different rules. Some of them have more requirements for visas, but some of them have less. For one city called Macau, the Chinese equivalent of Las Vegas, Americans do not need any visas.

Macau is in the southern part of China... which, historically, hasn't really been part of China for very long (well, not compared to the length of Chinese history, anyway). The city was originally founded as a trading colony by the Portuguese... and the moment I set foot there, I was stunned by the similarities between Macau and Lisbon.

Look at the next pictures, and see if you can guess whether it comes from A) Macau, or B) Lisbon. Answers will be in the next post!

Posted by Marta Stahlfeld at Saturday, July 18, 2020 No comments: